This is a post taken from STM Forum, where a case study was performed on several well-known tracking systems (the top 3 based on user polling).

If you're trying to decide on which tracker to use, I'm assuming cost will be a major consideration. Of course there are others such as tracker features, ease of use etc.

However, this post is designed to demystify the pricing structure of this essential software. It will compare the 3 trackers purely from the economical standpoint - to calculate some estimated costs based on some assumptions of your current (and future) traffic levels.

Before doing anything else, let's define what "hits" are, because that is the main metric that determines tracking costs.

Basically, a "hit" is anything that results in data being logged in the tracker - when a banner is clicked, when a pop lander is displayed, when a lander is clicked through, or when a conversion is posted to the tracker from the affiliate network or offer advertiser.

For self-hosted trackers, more hits means you need a more powerful server. For managed trackers, the cost is calculated based on the number of hits as well.

Voluum charges by the number of "events", which is practically the same thing as hits. One interesting point about Voluum is that it does not count “events” from its sister company Zeropark as chargeable hits, so if you are running mainly Zeropark traffic, Voluum can be a very cost effective option.

Thrive charges by initial hits only. This is important, since it will only count banner clicks for display traffic, or lander impressions for pop traffic. No matter how many lander click-throughs or conversions you have, prices are based only on initial hits.

FunnelFlux’s software costs is a flat $99 per month. However, Funnelflux is a self-hosted solution, which means that you are responsible for your own hosting. Your hosting costs will necessarily increase with the number of hits as well: the higher your traffic volume, the more powerful your hosting will need to be, which will result in higher additional costs.

Voluum is a fully hosted and managed tracking solution, and has the following plans and corresponding costs:

Note: Thrive charges by initial hits only - lander clicks and conversions are free.

(Prices are for reference only - subject to change at any time.)

Here comes the interesting part - Hits vs. Cost graphs for the 3 tracking solutions.

Because Voluum charges by "events", Thrive charges by initial clicks/visits, and FunnelFlux server costs depend on the number of hits, the only way to compare apples to apples would be to calculate costs for each tracker based on certain Lander CTRs.

What do I mean by that? Allow me to take the first set of data points from the graphs, and explain what all the numbers mean:

In this table, "Initial Hits" are either banner clicks if running display traffic, or lander visits if running pop traffic.

How much traffic or "Initial Hits" can you send to the tracker without going over 1M events?

(Note: Normally, the number of conversions are included as "events", but because they are usually negligibly low compared to initial hits or lander clicks, they are excluded for ease of calculation.) 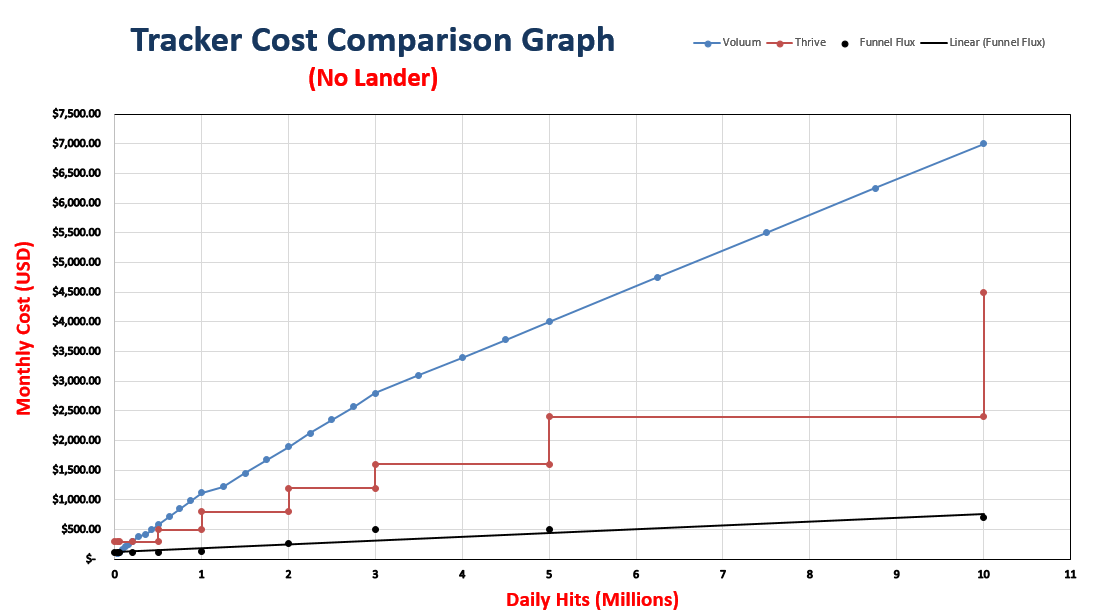 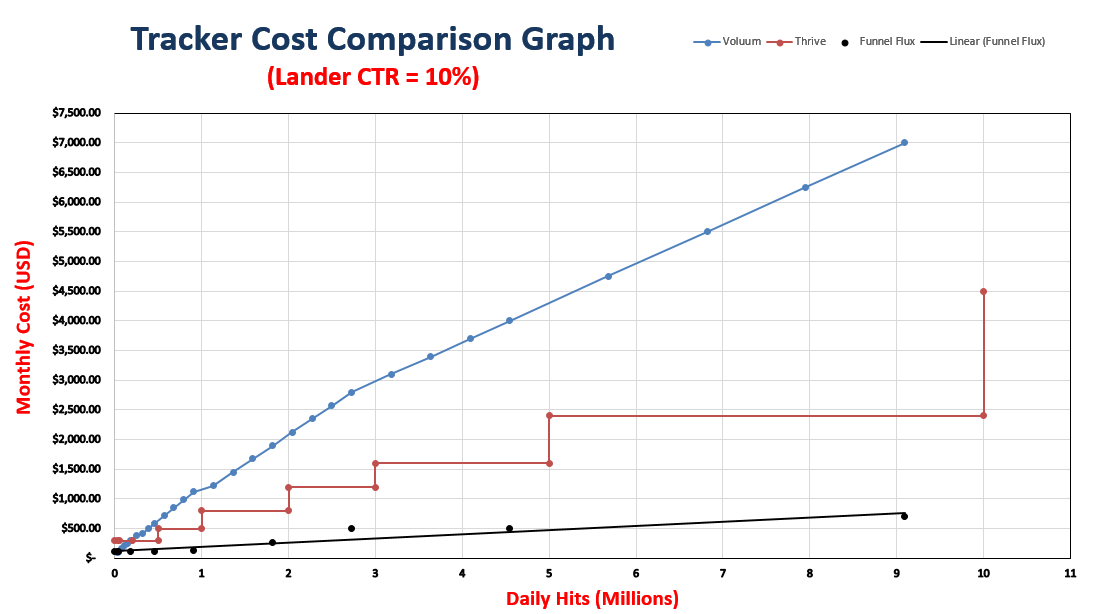 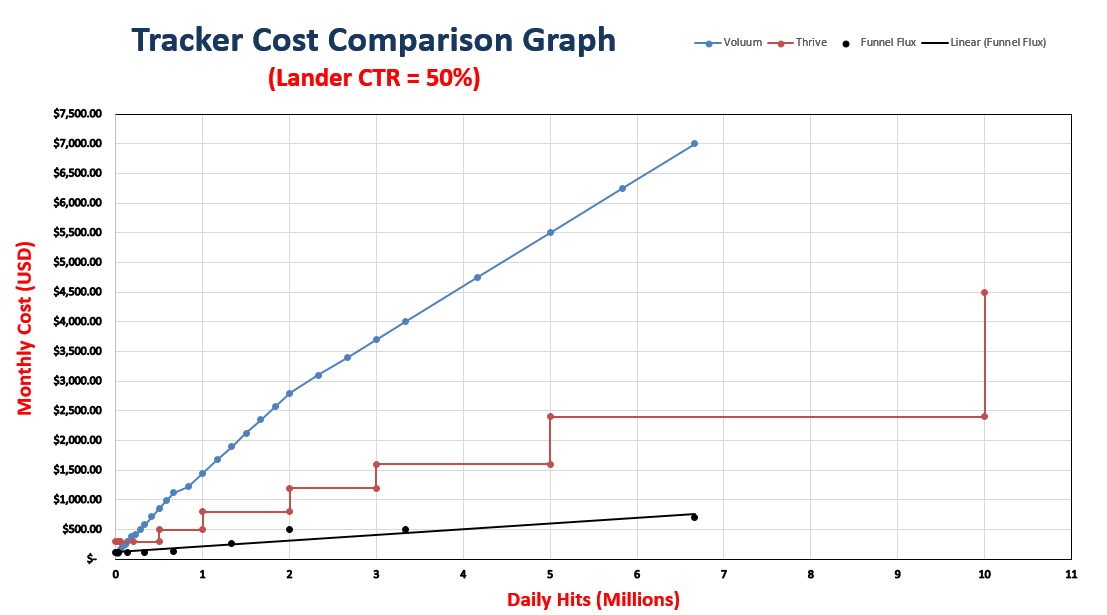 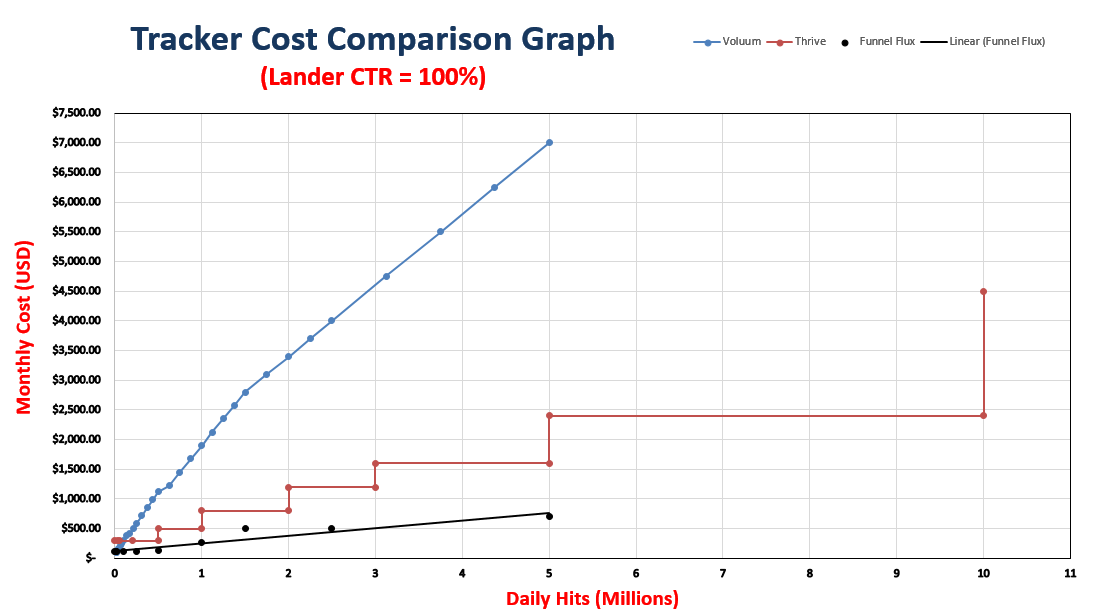 (Note: regarding Voluum data in the graphs above: The Voluum Cost Calculator only goes up to 100M events/month, or 3.33M events/day - which costs $3099/month. All costs beyond this level are extrapolated based on known data.)

Questions? Comments? Please ask/make them below!